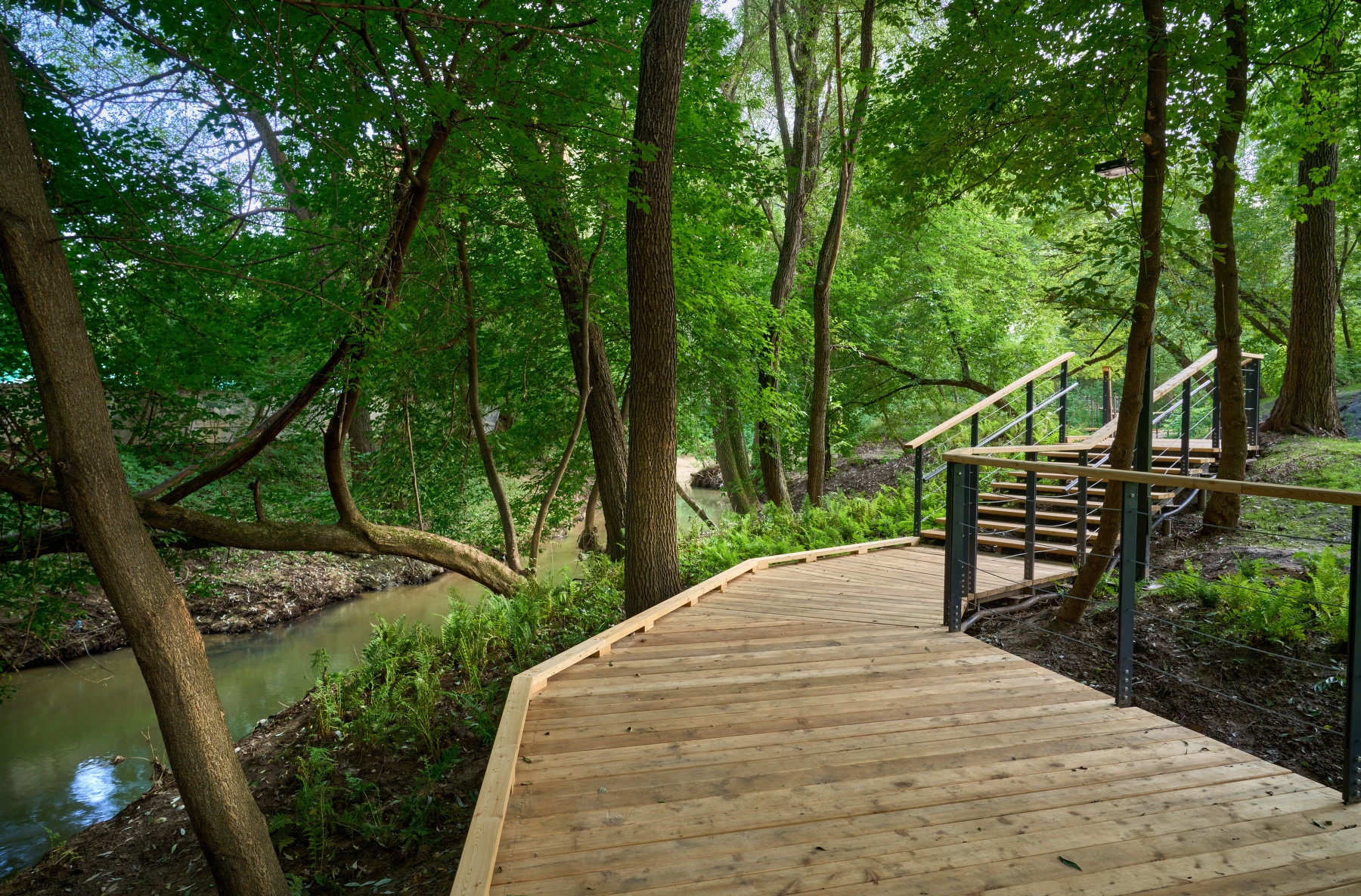 The first stage of the improvement of Ramenka river embankment has been completed within the framework of the West Garden business class project, which is being built by the INTECO developer in the west of Moscow.

The walking area is a nature trail elevated above ground level, which made it possible to preserve as much as possible herbs, shrubs and trees of the existing flora. In addition, more than 40 trees (maple, mountain ash, bird cherry, willow), about 12,000 shrubs (viburnum, dogwood, blackberry, spirea), and about 7,400 flowers (meadow rue, bell-flower, lungwort, iris, Brunnera, fern) were planted. The walking route, which is equipped with comfortable slopes to the river, is made of natural larch emphasizing the ecological component of the West Garden concept.

Special paths are provided on the embankment, equipped with everything necessary for comfortable going down to the river, for the unhindered movement of people with limited mobility and parents with strollers. Functional lighting all along the nature trail is designed according to a special scheme to ensure safety of being on any part of the route.

The landscaped embankment of the Ramenka river will become part of a comfortable urban environment where you can walk and play sports outdoors, relax on benches and sun loungers surrounded by nature, an abundance of green spaces, forgetting about the bustle of the metropolis. The West Garden project is expected to comprise equipped play and sports spaces, cozy social zones and a dog walking area along the embankment. Moreover, landscape compositions and works by famous Russian artists that were displayed at the latest public art exhibitions will be installed.

As one of the largest developers on the Moscow market, INTECO is interested not only in meeting the ever-growing customer requirements, but also in the development of urban public spaces. Therefore, we pay great attention to the improvement concepts in our projects. I am sure that the nature trail created as part of the West Garden residential complex will become a new attraction point for residents of the entire district," commented Stanislav Frolov, Vice President - Head of INTECO Development Block. He added that the area of the landscaped embankment and the decorated courtyard in West Garden would be about 15 hectares.

About 80% of the West Garden project area will be landscaped. In the private courtyards, a central promenade will appear, as well as six gardens, each of them made an individual color code: white, scarlet, meadow, lilac, steppe and fragrant. Recall that West Garden will become a pilot project, where the developer implements an innovative method for creation and fitting neurodynamic children's play spaces that promote physical and cognitive development.
More news on facebook
All news
More questions?
We will be happy to tell you more about our projects by telephone +7 (495) 662 80 02
or by email info@inteco.ru