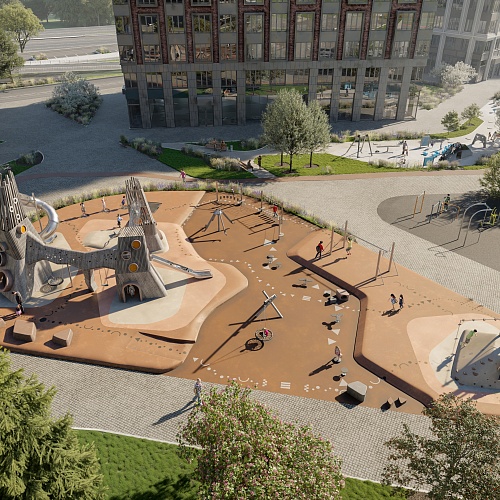 INTECO developer has started arranging Russia's first neurodynamic playgrounds for the harmonious physical and cognitive development of the younger generation within the West Garden business class project, which is being built in the west of Moscow.

The professional staff began assembling a part of the sports equipment. Some of the implements are conventional, such as two-suspended swings, horizontal bars, slides, balancers and others, while some others are custom made. A large space will be occupied by tools for creativity, self-expression and imagination for children of different ages. Unusual shapes, natural colors and touch-friendly materials will allow the younger generation to develop attention, memory, visual and auditory perception at play and communication.

The neurodynamic approach is based on studies of the vestibular system. Development of child nervous system depends on the child interaction with the environment, while physical activity is necessary for the correct brain development. Author of the method, Doctor of Psychology Viktoriya Efimova, head of Prognoz clinic, author of the thesis “Psychophysiological mechanisms of a child's learning success”, examined about 4000 children aged 2 to 15 years using diagnostic devices that determine the degree of brain functional maturity. The researcher found that in many children with learning difficulties, it is the vestibular system and the brain structures previously associated only with movement control that do not work effectively enough. However, this deficit interferes with learning to read, write and count. Since the brain can change in response to experience (this is called “neuroplasticity”), the playgrounds (if properly designed) can provide the necessary motor experience.

“Previously, scientists did not know that stimulation of the vestibular system can improve memory, attention, and speech. Recent studies using functional magnetic resonance imaging have shown that the vestibular system has effects on the entire cerebral cortex, being the foundation for the higher nervous function development. The problem is that modern children do not exercise enough, which means they do not stimulate their vestibular system properly. I hope that neurodynamic playgrounds will change the situation for the better,” - shared Victoria Efimova.

A thought leader of the project, INTECO Marketing Director Irina Matvienko, explained that the neurodynamic approach would be used for creation of all children's spaces in INTECO residential complexes. Moreover, the company submitted the design documentation to the Ministry of Construction, Housing and Utilities of the Russian Federation for examination by experts in land improvement for use in open children's play and sports infrastructure. West Garden has become a pilot project, which is going to have grounds designed by leading experts in the field of neurology, psychology, architecture and landscaping.
More news on facebook
All news
More questions?
We will be happy to tell you more about our projects by telephone +7 (495) 662 80 02
or by email info@inteco.ru